Films are a very powerful medium to shape narratives and sensitize audiences about various subjects and less-discussed topics in society. Such movies have inspired people to have conversations and an awareness and understanding of gender fluidity. Here are 11 actors who have played LGBTQIA+ roles in Hindi cinema and started much-needed conversations. 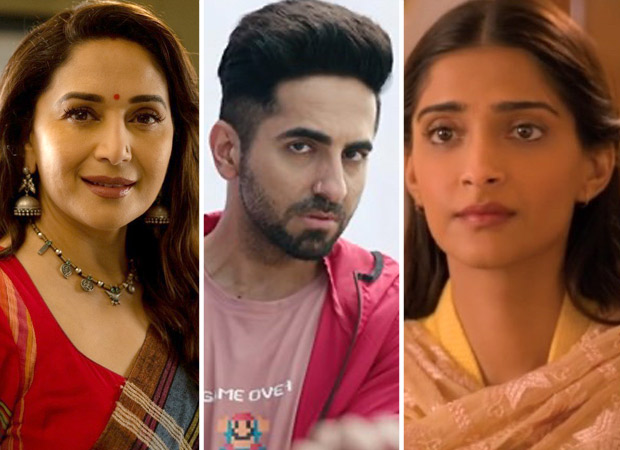 11 Bollywood actors who portrayed LGBTQ characters on the silverscreen

Madhuri Dixit in Maja Ma
Madhuri Dixit essayed the role of Pallavi Patel and showcased how a middle-aged woman who performs her duty as a housewife and a mother, finally comes out of the closet and owns her individual identity.

Rajkummar Rao in Badhaai Do
Rajkummar played the role of a gay cop in Badhaai Do deliviring one of the key messages – you can’t run away from yourself, so it’s better to find solutions and ways to make yourself happy.

Purab Kohli and Sanjay Suri in My Brother Nikhil
Based on the true story of Domini D’ Souza, an Indian AIDS activist, the film through Nikhil’s character portrays the struggles of being an HIV patient and gay. Sanjay Suri plays the role of Nikhil Kapoor, a closeted gay man and state swimming champion who gets diagnosed with HIV following which he is abandoned by parents and kicked out of his swimming team.

Purab Kohli plays the role of Nigel (Nikhil’s boyfriend) who along with Nikhil’s sister Anamika (played by Juhi Chawla) and her boyfriend are the ones to support him in his crisis.

Kalki Koechlin in Margarita With A Straw
Kalki plays the role of Laila, is a bisexual teenager with cerebral palsy (a movement disorder) who falls in love with a young activist named Khanum, a blind girl with an independent personality. During the course of the film, she gets confused about her sexual orientation as she is also attracted to a man named Jared.

Vaani Kapoor in Chandigarh Kare Aashiqui
In the film, Vaani plays the role of a trans-woman, Maanvi Brar and showcased how a female is trapped inside a male body but with the help of cognitive therapy and multiple operations, she finally felt liberated.

Fawad Khan in Kapoor & Sons
The film is about a dysfunctional family where two estranged brothers return to their folks after their grandfather suffers a cardiac arrest and they come face to face to their parents’ collapsing marriage. Fawad Khan essays the role of Rahul Kapoor, a homosexual man who keeps the truth guarded until he comes out of the closet.

Randeep Hooda & Saqib Saleem in Bombay Talkies
Both actors play homosexual characters in the film. Randeep plays the role of Dev, a closeted homosexual married man. Saqib portrays Avinash who leaves his parents’ house in distress as they are ashamed of his sexuality and confuse him for a eunuch.

Such movies have not only opened up avenues for discussions but are also helped spread awareness to make the world a more accepting place. Celebrate love and watch these movies, if you havent already.

Also Read: Kareena Kapoor says she will ensure she discusses about the LGBTQ community with Taimur and Jeh