Producer Boney Kapoor has joined hands with Ajith Kumar for the actor’s next which was referred to as AK61. Now, the film has finally found its title as Thunivu (fortitude) and fans of the Tamil superstar arrived outside theatres, in full band-baaja style to welcome their hero’s next film as well as to celebrate the release of the first look poster. 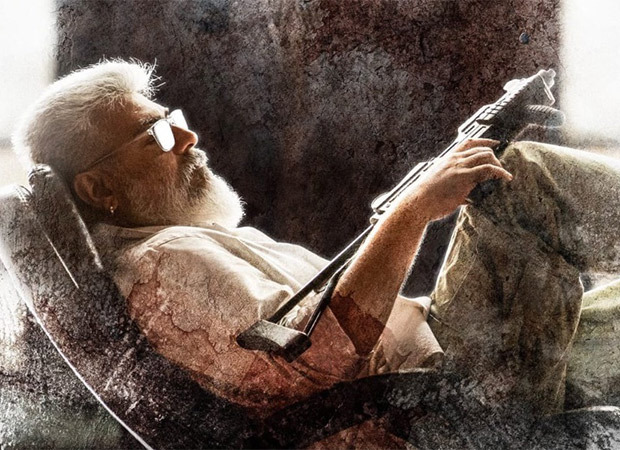 The first look poster of Thunivu features Ajith Kumar sporting a white beard and hair with sunglasses. He is seen holding a rifle and relaxing on a couch. Along with that, the film’s caption reads, ‘No Guts, No Glory’ Going by the poster and the title, it feels that the actor will be seen in an action-packed avatar in this film. Announcing it on social media, producer Boney Kapoor shared the poster on social media tagging the entire team, “#Thunivu #NoGutsNoGlory #AK61FirstLook #AK61 #Ajithkumar #HVinoth @ZeeStudios_@BayViewProjOffl @SureshChandraa #NiravShah @GhibranOfficial #Milan @SupremeSundar_@editorvijay #Kalyan #AnuVardhan @premkumaractor #MSenthil @SuthanVFX #CSethu #SameerPandit @anandkumarstill”

Soon after the announcement, fans crowded outside theatres, whistling and celebrating the release of the new poster and the title of their favourite idol’s next. Along with the poster, Boney Kapoor also started a social media account for the film where videos of fans rejoicing this moment was shared online. The videos featured fans dancing to the band-baaja as they celebrated the first look poster release as well as the announcement of the title.

It’s just a first look for others, but for his fans???? #Thunivu

Speaking of Thunivu, the film will be directed by H Vinoth and produced by Zee Studios. It is yet to be seen as to which actress will be playing the leading lady.

Also Read: Ajith Kumar takes off on a Europe trip and his passion for biking will truly leave you inspired