PETA has named Fatima Sana Shaikh its Most Beautiful Vegetarian celebrity. The actress who has won our hearts in movies and series like Dangal, Ludo, and Modern Love among many have won the coveted title along with John Abraham. Time and again, Shaikh has been vocal about several social issues, one of them being helping animals. The star had recently shared pictures of her fostered cats with her 3 million Instagram followers and spoken up for improving animal-care facilities in Mumbai. 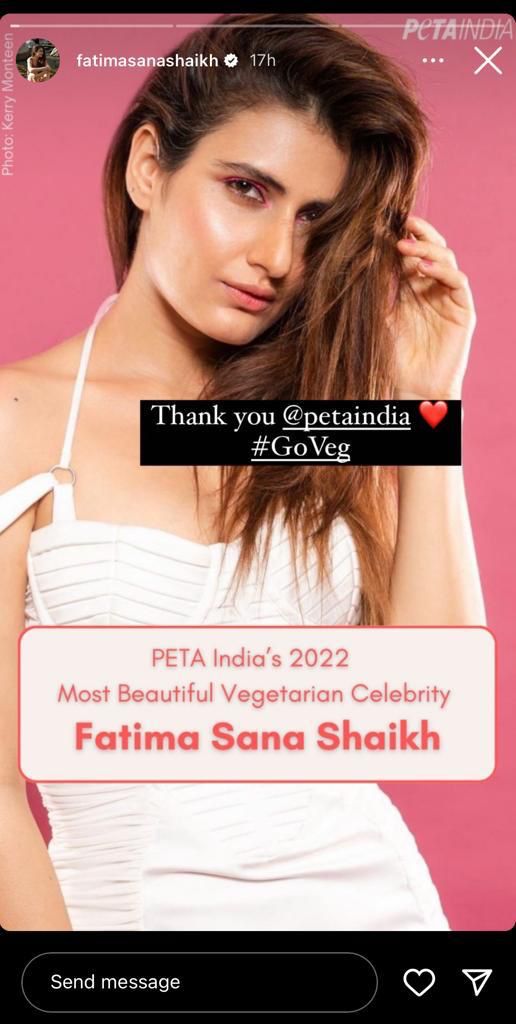 Currently, the actress is gearing up for Sam Bahadur as it was recently announced that her most awaited film will be released on December 1, 2023. Listening to this major announcement her fans have expressed excitement to see her play the role of Prime Minister Indira Gandhi.

Apart from that, the actress recently celebrated National Epilepsy Awareness Month and taught people about epilepsy’s causes and symptoms on social media. Apart from that, Fatima Sana Shaikh has wrapped shooting for Dhak Dhak. The actress was highly appreciated for her role in Modern Love. Her story of Raat Rani was well received across audience, and got rave reviews. Along with Sam Bahadur Fatima Sana Shaikh has an interesting lineup and she will also be seen in Dhak Dhak.  Directed and co-written by Tarun Dudeja, co-produced by Taapsee Pannu, Pranjal Khandhdiya and Ayush Maheshwari.

Also Read: Fatima Sana Shaikh looks euphoric in this black sequin dress; we cannot take our eyes off her!