Clothes were once used until they fell apart – repaired and patched for reuse, ending their lives as dish rags and oil rags. Not today. Especially in high-income countries, clothing, shoes and upholstered furniture are increasingly bought, discarded and replaced by new models, which are themselves quickly discarded and replaced.

The proof is in the data. In 1995, the textile industry produced 7.6 kilograms of fiber per person on the planet. By 2018, this had almost doubled to 13.8 kilograms per person – during which time the world’s population also increased, from 5.7 billion to 7.6 billion people. More than 60 million tons of clothing are now purchased each year, a figure that is expected to rise even further, to around 100 million tons, by 2030.

‘Fast fashion’ is so called in part because the fashion industry now releases new lines every week, when historically this happened four times a year. Today, fashion brands produce almost double the amount of clothing they produced in 2000, most of it produced in China and other middle-income countries such as Turkey, Vietnam and Bangladesh. Worldwide, 300 million people are employed by the industry.

But incredibly, more than 50 billion garments are thrown away within a year of being made, according to a report from an expert workshop convened by the US National Institute of Standards and Technology (NIST), published in May. 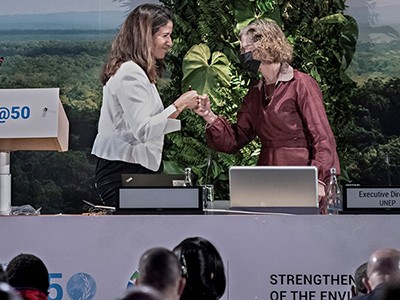 Textiles fit into two broad categories: natural and synthetic. The production of those such as cotton and wool, which are made from plant and animal sources, is largely stable, although slowly growing. In contrast, the production of polymer-based fibers, especially polyester, increased from about 25 million tons per year in 2000 to about 65 million tons in 2018, according to the NIST workshop report. Taken together, these trends have a staggering environmental impact.

Get water. The fashion industry, one of the largest users of water in the world, consumes anywhere from 20 trillion to 200 trillion liters each year. Then there is microplastic. Plastic fibers are released when we wash polyester and other polymer-based textiles and make up between 20% and 35% of the microplastics that clog the oceans. Added to this are specific chemicals, such as those used to make fabrics stain-resistant, and pesticides needed to protect crops like cotton.

Change is much needed, but it will require the fashion industry to work harder to embrace more of what is known as the circular economy. This will involve at least two things: refocusing on making things that last and thus encouraging reuse; and faster expansion of technologies for sustainable production processes, especially recycling. There is a major role for research – academic and industrial – in achieving these and other ambitions.

Researchers can start by helping to provide more accurate estimates of water use. Surely it should be possible to narrow down the range to between 20 trillion and 200 trillion liters of water. There is also work to be done in improving and expanding textile recycling. Overwhelmingly, used textiles end up in landfills (in the United States, the percentage is about 85%), in part because there are relatively few systems (at scale) that collect, recycle, and reuse materials. Such recycling requires manual separation of fibers as well as buttons and zippers. The different threads are not easy to identify by eye, and generally these manual processes are time-consuming. Machines are being developed that can help. Technologies also exist to chemically recycle used fibers and create high-quality fibers that can be reused in clothing. But these are nowhere near the necessary scale.

Another challenge for researchers is to work out how to get consumers and producers to change their behavior. This is already an active area of ​​study in the social and behavioral sciences. For example, Verena Tiefenbeck at the University of Bonn in Germany and her colleagues found that when hotel guests were shown real-time feedback on the energy used to shower, it reduced showering energy consumption by 11.4%.1. Other research questions include finding ways to encourage people to buy sustainable goods; exploring how to satisfy cravings for something new while reducing environmental impact; and understanding why some interventions can scale up successfully while others fail. 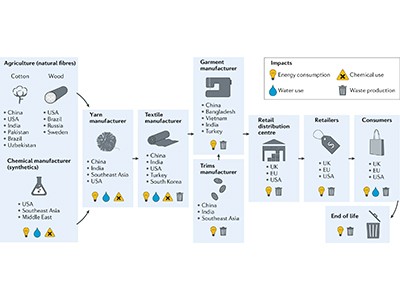 The environmental price of fast fashion

Industry and academia could also collaborate to create a system to track textile microplastics. This can be done digitally, for example. It would require an agreed definition of what constitutes textile microplastics, such as their material composition and dimensions. Companies, universities, activists and governments must also consider how to make their technologies more accessible. Doing so would speed up development and testing, and (eventually) adoption at scale.

There are also schemes in other areas that can be a source of ideas. The World Health Organization has considerable experience with accessibility, for example in its Accelerator of Access to COVID-19 tools. Through this, companies and governments agree on the principles of sharing key technologies in diagnostics and drug development. And in the early 2000s, the Rockefeller Foundation, under its then-president Gordon Conway, an ecologist now at Imperial College London, made a big push to encourage companies to share technologies in agricultural biotechnology, creating the African Agricultural Technology Foundation . These schemes are not perfect and are constantly evolving, but they offer ideas and lessons that should be studied and considered.

Meanwhile, campaign groups are doing most of the heavy lifting with industry. The Ellen MacArthur Foundation, a UK-based charity that promotes circular economy solutions, is in the second iteration of a campaign called Jeans Redesign, which challenges clothing manufacturers to find circular solutions for every strong wardrobe. Some manufacturers have made their denim production process more circular by using organic cotton and inserting zippers in a way that allows them to be easily removed when the clothes are recycled. Others are using reinforced stitching to make their products last longer. These are important proofs of principle, but such techniques need to become commonplace.

These actions come at a cost and challenge the idea of ​​fast fashion because they can make items less affordable for consumers looking to keep up with the latest trends. Brands and retailers take a serious view of the risks to their bottom line (and may choose to delay action on sustainability as a result). This is why government action is essential.

Policies need precision and teeth, which the current ones do not always have, and ideally should be coordinated. A recommendation from the European Union to member states, for example, states that by 2030 there should be “mandatory minimums for the inclusion of recycled fibers in textiles, making them more durable and easier to repair and recycled”. This is very vague. Without more specific targets it will be very difficult to track for compliance purposes. China, the world’s largest producer of textiles, also has a five-year circular economy plan for the industry. Considering the interconnectedness of fast fashion, China and the EU, along with the United States and others, should try harder to coordinate their efforts.

Small steps are good, but big changes are needed. There is no time to waste when it comes to changing textile production and design. The embarrassing environmental cost of a fancy new wardrobe needs to be addressed immediately, at scale, with flair and style.