Ever since the trailer of director Rohit Dhawan’s Shehzada dropped on the internet and social media, Kartik Aaryan’s fans have gone into a frenzy. Although the actor is known for giving a series of commercial hits, this is the first time that he is starring in an out-and-out masala entertainer and this seems to have worked out well with the trailer going viral in no time. 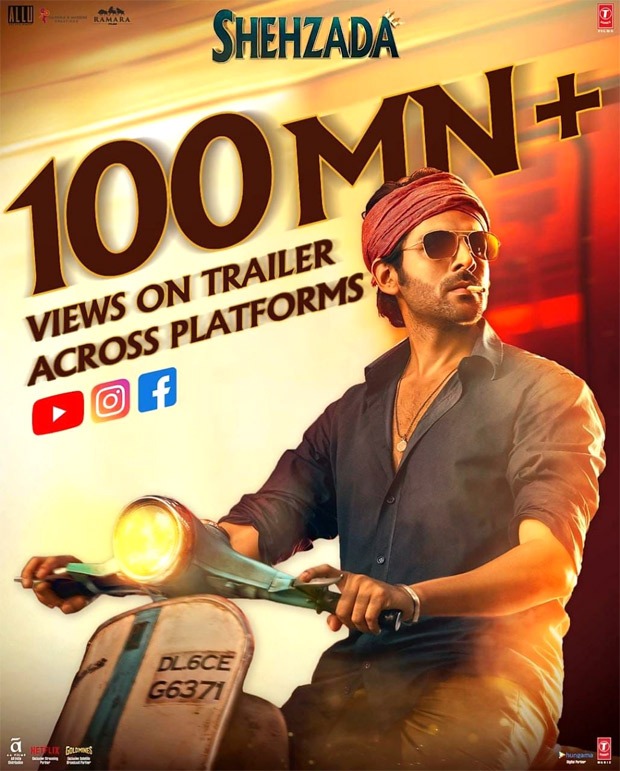 Now, the Shehzada trailer has crossed a major milestone as it has gone past 100 million views across platform on YouTube, Facebook and Instagram in just 11 days.

Shehzada is the official Hindi remake of the Telugu film Ala Vaikunthapurramuloo. Released in 2020, the movie starred Allu Arjun in the lead role along with Pooja Hegde, Nivetha Pethuraj and Sushanth Anumolu. The remake has been produced by Bhushan Kumar under his banner T-Series.

Recently, Kartik was seen in Rajat Sharma’s television chat show Aap Ki Adalat. Among various things, he also spoke about him emerging as a major star of Bollywood lately. “I have always seen myself as no. 1,” he said on the show. “Slowly people are also getting to know that and are seeing me like that. But the audience’s love is what matters the most to me. I am desperate for their love and only for that am I obsessed with myself and want to give hit films… there’s only one Shehzada (prince) in the film industry.”

Shehzada is all set to release on February 10.