The adventure thriller Karthikeya 2 starring Nikhil Siddhartha and Anupama Parameswaran, impressed audiences across the globe and making a mark with its box office collections. It has also managed to make an impression after releasing on OTT. And of course, it is also a special film for Nikhil and the actor recently received yet another honour for his performance as well as owing to the rave reviews the film garnered. 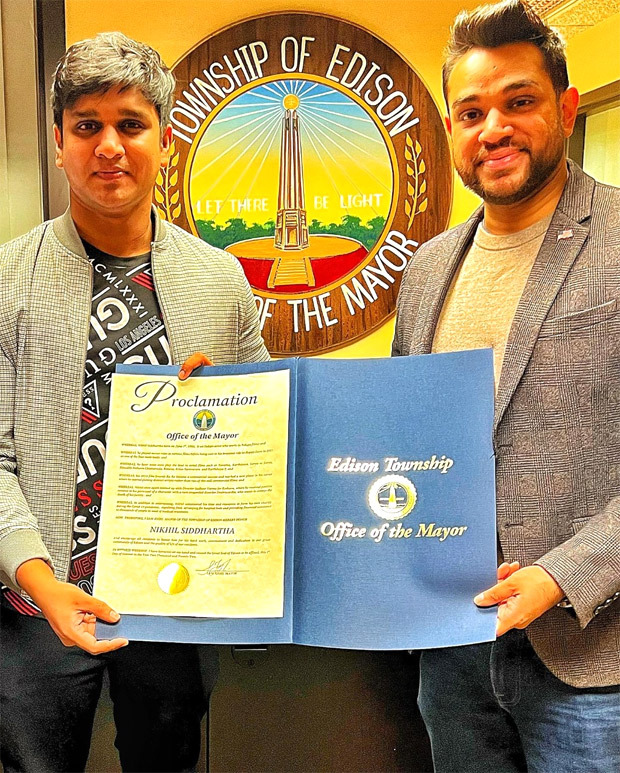 Karthikeya 2 has become a special film in Nikhil’s career as he has received constant appreciation from celebrities and notable personalities all around the world. Now, Mayor, Township of Edison – Mr Sam Joshi honoured Nikhil Siddhartha for his brilliant work in the industry and the blockbuster success of Karthikeya 2 in USA. A source close to the film said, “The team is overjoyed with the appreciation they are receiving from all over the world. It is rare to see such widespread acclaim for a film.” The actor also posted about it on his official Instagram page, expressing his gratitude towards the Mayor. Here, have a look at the post:

Karthikeya 2, the sequel to the 2014 film Karthikeya, is a supernatural mystery thriller film. Directed and written by Chandoo Mondeti, Karthikeya 2 also stars Anupam Kher and Srinivasa Reddy. The movie is jointly produced by TG Vishwa Prasad and Abhishek Agarwal.