The state Department of Transportation has proposed acquiring five entire properties along Route 82 for the first phase of a controversial reconstruction project that would include the intersections with Asylum, Pleasant and Osgood streets. In addition to the five whole-asset acquisitions, Phase 1 calls for the acquisition of 44 partial assets along the way. 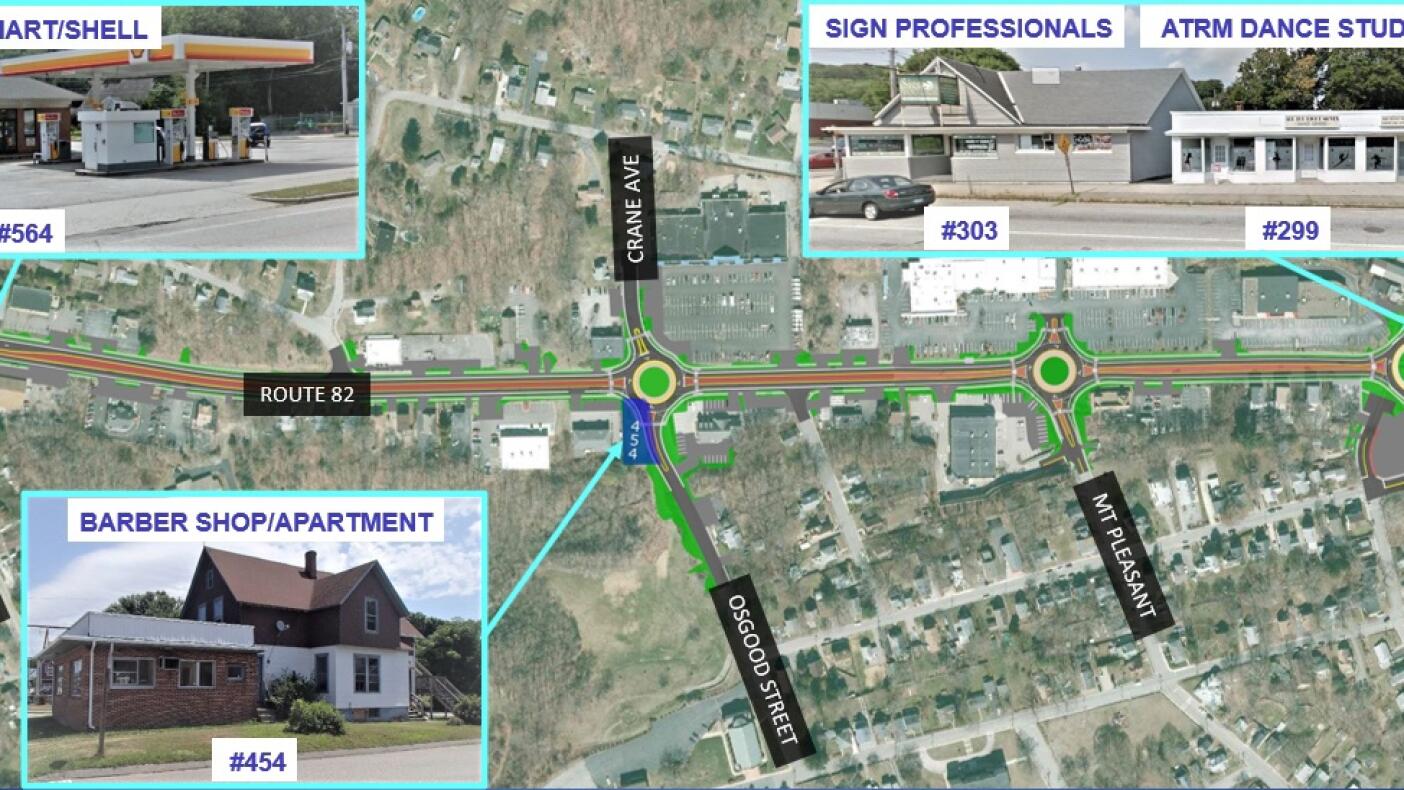 NORWICH – David McDowell designs and prints signs for a living, and now he’s printing one designed to save his life.

The state Department of Transportation’s controversial proposed detours along Route 82-West Main Street would demolish his and four other buildings.

So, when protesters asked him to put up a “No Roundabouts” sign to protest the $20 million project, McDowell was skeptical that it would work, but he went to work as he would with any business order.

On Thursday, McDowell sent a sketch to Mayor Peter Nystrom, a staunch opponent of the project. Residents and business owners also requested signs.

“I’m a professional sign maker, so I’m sure, I can make the signs.

But McDowell said it may be too late, now that the City Council voted 4-3 on Sept. 6 to allow DOT to proceed with advanced design work.

Design work is 30% complete for Phase 1, from Fairmont to Dunham Street from Asylum, Mt. Along Pleasant and Osgood Streets. Project officials will contact prospective buyers and businesses to begin negotiations. Design work for Phase 1 will be done in the fall of 2024, DOT spokeswoman Shannon King said.

McDowell said he has no complaints about the DOT project team presenting plans at public meetings and communicating with property owners. But McDowell says the state’s acquisition process is flawed and unfair. The state’s fair market value does not measure lifetime employment, sacrifice and retirement plans by small businesses.

“My whole life has been in this business,” he said Thursday. “I started with $1,200 at the bottom house.”

McDowell leased and purchased the building at 303 West Main St. He plans to retire, sell the business, and lease the building for his business.

“This building was my 401k,” he said. “The government does not take this into account.”

Nearby, Dayna Gallivan expressed similar frustration at the prospect of losing her livelihood. She started All Right Moves Dance Studio 33 years ago and bought the building at 299 West Main St. 28 years ago. Her students range in age from 3 to 18, and she said families love her neighborhood and have never heard of traffic complaints that prompted the state to propose the redevelopment.

“I can never afford to go to a new place on this strip,” Gallivan said. “You have to charge a lot for dance lessons. We are a small dance studio, family atmosphere. Mothers like to leave the children and shop for a while.

Like McDowell, Gallivan said the building is her retirement plan, either to sell or lease to a new business. She puts a sign in her window that says, “No turning spots.” DOT should try median dividers, left turn lanes, speed bumps or other less aggressive measures, she said.

A short, private Crane Street across from Osgood Street will also be purchased and turned into a city street.

DOT officials estimate that 44 partial purchases will be needed in Phase 1. The road will be reduced to one travel lane in each direction with a median divider with a left turn, a 5-foot-wide bike lane, and a reconstruction of sidewalks.

Phase 2, which is still in the “concept stage,” would require more properties and would go past the New London Turnpike to Salem Plaza. Together, the project will replace seven traffic lights at six intersections.

Jalal Ahmed, manager of the Extra Mart/Shell gas station and convenience store at the corner of West Main and Dunham streets, said he has worked there since January 2019.

Ahmed said it took some time after the owner bought the site in 2015 to build a loyal customer base. Business was slow at first, he said. Now, at the end of the week, it almost continuously drives gas purchases, lottery ticket orders and redemptions, and purchases of snacks, cigarettes and vape products.

“We’ve been good to customers, and they’re coming,” he said. “It’s hard to go anywhere else. We know the people. We are used to it. To go somewhere else, it starts all over again.”

Ahmed says he understands that the road is dangerous. The car swerved to the left once and struck a man who did not see it coming.

DOT officials cited state statistics from 2017 to 2021 that show an average of 100 crashes per year with 35 injuries per 1.3 miles. About 40% occurred in areas with no traffic signals and 60% occurred at seven signalized intersections.

Nicknamed “Crash Alley,” the strip of business from I-395 to downtown’s “Golden Mile” has been called the best place to do business.

Lorenzo Paulino and Luis Jimenez, partners at The Garage Barbershop at the intersection of West Main and Osgood streets, said business is “100% better” since moving from Franklin Street three years ago. The building has parking and easy access at the Osgood traffic light.

Paulino said he knew about the proposed Route 82 reconstruction project when he moved to another location, but said he did not know if it would come to fruition. Both said they were “very disappointed” at the prospect of moving.

“I’m thinking about everything, where I’m going, my clients and everything,” Paulino said.

They both live in Norwich and want to keep their shop in the city.

“It’s sad, because this is a great place,” Jimenez said. “We are comfortable here. My clients love it here. It’s very busy here, nice environment.”

The city council has tapped its economic development agency, the Norwich Community Development Corporation, to help businesses displaced by the project and other years of construction disruption. Phase 1 will begin in the spring of 2025 and be completed by the fall of 2026 — what business owners call overly optimistic. Phase 2 construction is scheduled to begin in 2027.

NCCC President Kevin Brown said it is working on ways to help businesses that experience loss of income during construction with relocation, renovations, capital expenditures and possible grants.

City officials have already identified 16 vacant properties. Brown said if any of the displaced businesses want to relocate, NCDC may be able to help beyond what the state negotiates with displaced business owners.

NCDC has $1.5 million in funding for the Norwich Revitalization Program under the city’s America’s Savings Plan Act. Part of the program provides financial assistance to prepare an open space for a new business.

Brown said he will pursue state grants through the new Community Investment Fund to help Route 82 businesses. He asks the state’s Department of Economic and Community Development to prioritize funding due to road construction disruptions.

“If we put together what the state is offering for grants and compensation and adjust the ARP allocation to help us make it livable, we can make it cost-free or at least cost less to the business,” Brown said.

As for construction disruptions, Brown said he questions whether the state could mirror an aid program recently proposed by Gov. Ned Lamont that pays restaurants, wineries and hospitality businesses affected by the Covid-19 pandemic. The state Department of Revenue Services will pay $7,500 to $49,999 to businesses that show a loss of revenue during the outbreak.

“We can look at it,” Brown said. “We cannot promise that we will be able to help them fully overcome any business impact they may have. “But if the state Department of Revenue Services can help us figure it out, then we can work on a retroactive business,” Brown said.

The state Department of Transportation’s preliminary design plan for Phase 1 of the 82-West Main Street reconstruction project calls for the acquisition of five properties and a short private road, Crane Street. Another 44 partial purchases may be required along the way.

Five properties are to be purchased: